Driven by climate, energy and industrial policy goals, hydrogen and fuel cell applications are being developed and promoted as future key technologies in the People’s Republic of China. A particular focus of the developments, which are decisively directed by the central government, lies in the mobility sector, in which hydrogen fuel cell vehicles as well as battery-operated vehicles are regarded as New Energy Vehicles (NEV) and receive corresponding support. The market landscape in China is developing dynamically as a result of the additional infrastructure funding measures.

At the present time, there are several suppliers that are already manufacturing fuel cell buses and light trucks on a small scale. The first passenger car models are expected to become available from 2020. In the long term, the hydrogen employed is to be produced with electricity produced from renewable sources. The first power-to-gas demonstration plants using electricity from wind and photovoltaic-based power are already being planned or implemented.

The latest factsheet from NOW provides information on the most important political framework conditions, on the current status of vehicle numbers and infrastructure, on strategic cooperation measures and alliances as well as German-Chinese cooperation in the field of hydrogen and fuel cell technology. 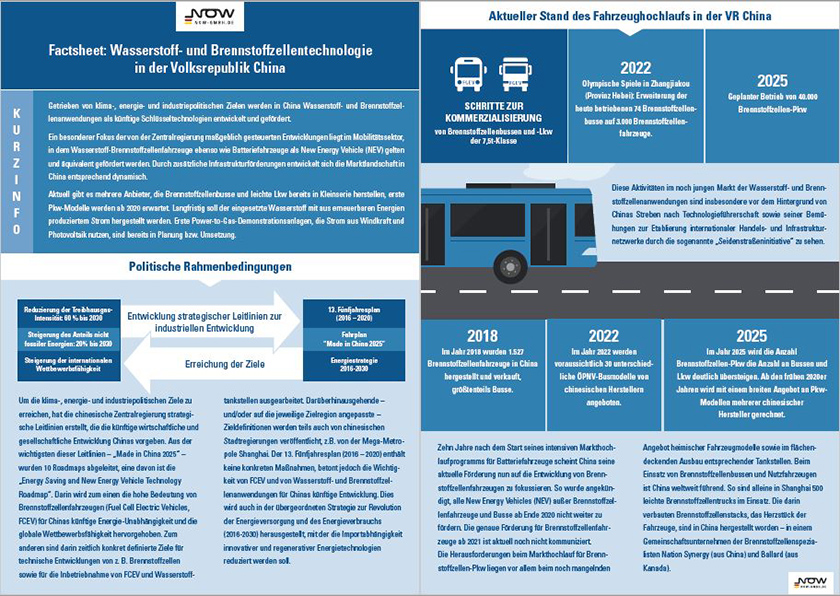