Funding support amounting to around 25 million euros is handed over by Federal Transport Minister Andreas Scheuer to joint projects in the Brandenburg districts of Barnim and Oberhavel.

Federal Minister Andreas Scheuer gave the starting signal for a groundbreaking project today at Basdorf railway station together with representatives from state and local politics: It involves nothing less than the development of a regional hydrogen infrastructure.

Andreas Scheuer, Federal Minister of Transport and Digital Infrastructure (BMVI): “We are reactivating the main line of the so-called Heidekrautbahn, we are connecting the outskirts with the city of Berlin – and we are doing it all with 100% green hydrogen: Today we are taking another giant step towards climate-neutral rail transport. And with this, we are resolutely implementing our National Hydrogen Strategy.”

The Minister brought a total of around 25 million euros in funding support with him, which he handed over to the three project sponsors ENERTRAG, Niederbarnimer Eisenbahn (NEB) and Kreiswerke Barnim. With this support, the three partners, who have been involved in the region north of Berlin for many years, intend to set standards in the development of a regional hydrogen infrastructure and sustainable mobility in local rail passenger transport. “By operating hydrogen-powered vehicles, noise pollution can be reduced and carbon emissions avoided in regional transport,” is how Detlef Bröcker, CEO of Niederbarnimer Eisenbahn, explains the core objective of the project. “The ‘green’ hydrogen is not only produced entirely from locally sourced, renewable energy, but also enables entirely emission-free regional passenger transport on the Heidekrautbahn across the entire value chain.” The NEB will receive funding of around nine million euros to be able to operate six hydrogen fuel cell trains on the RB27 regional railway line from December 2024. “The hydrogen trains increase the appeal of regional rail transport for commuter transport and tourism, and contribute to the expansion of environmentally friendly, green mobility in the region,” adds Bröcker. “The simultaneous reactivation of the main line of the Heidekrautbahn creates additional, outstanding synergies that can be exploited for climate protection and to promote sustainable local rail passenger transport for the region north of Berlin.”

The necessary hydrogen, which is to be produced entirely from renewable electricity, is being supplied by the established energy producer ENERTRAG, which is receiving subsidies of around 13 million euros for the construction of a hydrogen plant. “We aim to supply our region with hydrogen from wind power. It is the cheapest renewable fuel. For the past ten years, our hybrid power plant has shown that electrolysis makes renewable energy easily storable. Hydrogen is the prerequisite for a successful energy transition. In the transport sector, which there is an urgent need to emit less carbon dioxide, it is the ideal complement to electricity. Travelling through Brandenburg by train is certainly twice as nice when the fuel comes from local windmills,” is how Jörg Müller, CEO at ENERTRAG, describes the role in the joint project. The Kreiswerke Barnim, the third partner in the alliance, will create the necessary infrastructural conditions to make the hydrogen produced available at the place where the energy is needed by establishing a hydrogen filling station. The project is being supported with 2.5 million euros. “Since 2017, we have been working together as a network towards the goal of using the electricity yield from renewable energy plants directly in our region, generating added value and advancing the energy transition. The funding decision sends a strong signal and provides the necessary support for the parties involved so that they do not lose touch internationally in the use of hydrogen and the development of the necessary infrastructure,” says Christian Mehnert, Managing Director of Kreiswerke Barnim.

Jörg Steinbach, Brandenburg’s Minister for Economic Affairs, Labour and Energy: “I have been supporting the obstacle-ridden project to convert local rail passenger transport on the Heidekrautbahn line to hydrogen fuel cell trains for several years. With the official go-ahead for the project, it is now finally becoming even more visible that Brandenburg is actively driving the energy transition with its innovative companies – and not only in the electricity sector, but also in mobility. The hydrogen project illustrates how sector coupling in mobility, which is so important for the energy transition, can work. I am convinced that hydrogen and fuel cell technologies will have a decisive industrial-political economic impact in the future.”

Guido Beermann, Minister for Infrastructure and Regional Planning in Brandenburg: “We are committed to advancing the mobility transition in our state. To ensure that even more people switch to sustainable means of transport such as rail, we are further expanding the local rail transport services. I am delighted that we are not only reactivating the historic main line of the Heidekrautbahn as part of the i2030 project, but also marking the start of a climate-friendly hydrogen infrastructure. This is an important step for more mobility and for economic development in Brandenburg.”

With the handover of the funding decision, the partners can now proceed with the detailed planning for the hydrogen production and infrastructure facilities as well as the vehicles – and initiate the necessary approval procedures. The goal is to have fuel cell-powered trains in operation by the timetable change on 15 December 2024.

The research partners BTU Cottbus-Senftenberg and the German Aerospace Center (DLR) will provide scientific support for the project. Gaining new insights into the long-term use of hydrogen fuel cell technology in regional passenger transport using exclusively green hydrogen through direct coupling to RE plants for the production of electrolysis hydrogen from 100% RE electricity is a central element in the joint project.

The project “Use of hydrogen fuel cell drives in local transport in the Barnim district” (“Einsatz von Wasserstoff-Brennstoffzellenantrieben im Nahverkehr des Landkreises Barnim”) is being funded by the Federal Ministry of Transport and Digital Infrastructure within the framework of the National Innovation Programme Hydrogen and Fuel Cell Technology with a total of around 25 million euros. The funding guideline is coordinated by NOW GmbH and implemented by Project Management Jülich (PtJ). 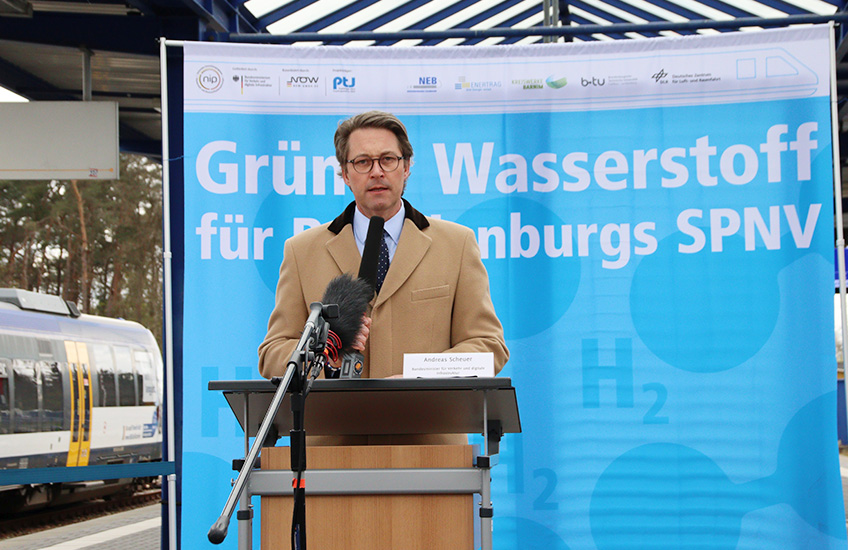 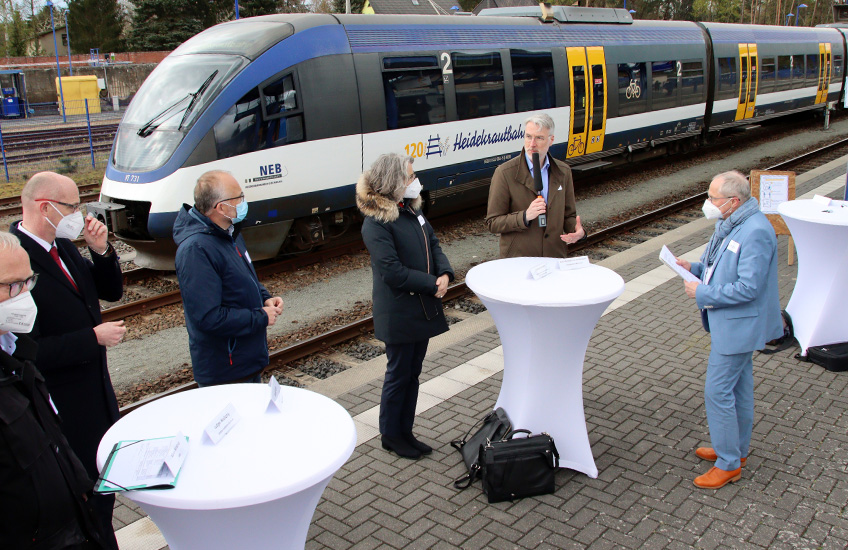 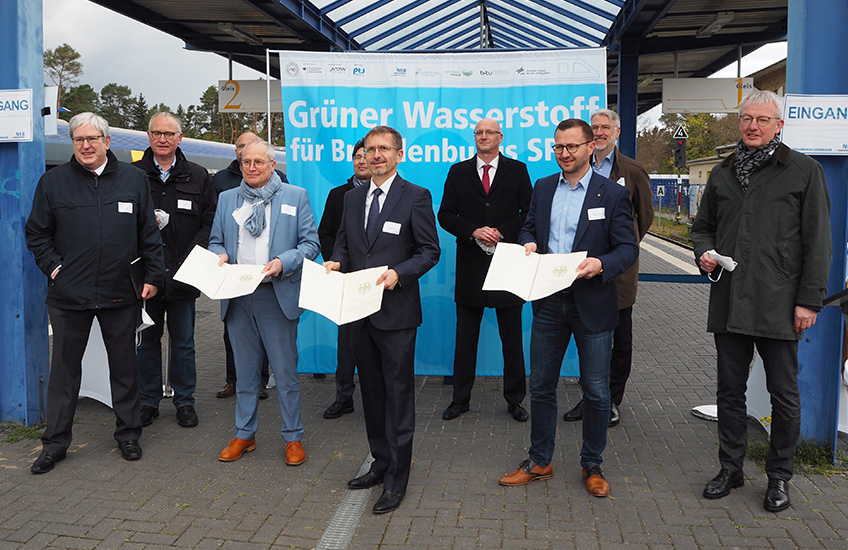 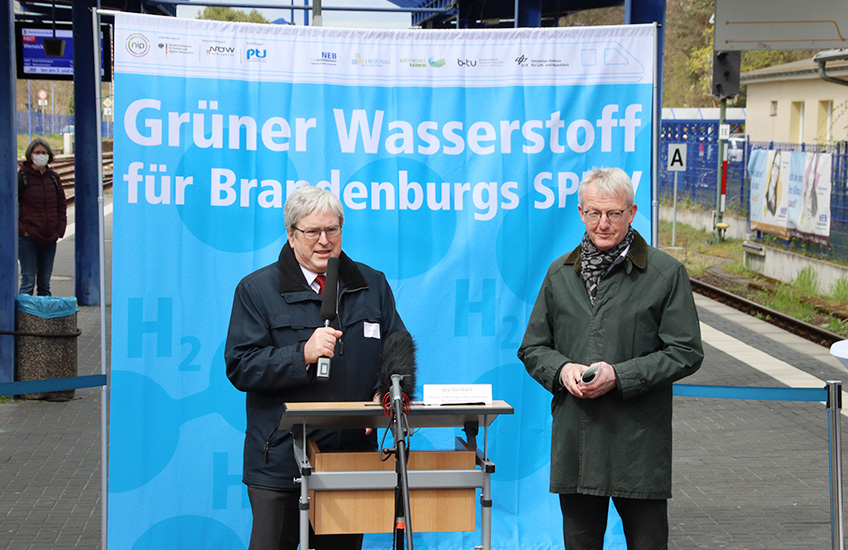