The new hydrogen facility at the Total gas station on Manchinger Straße – directly on the A9 motorway – is owned and operated by H2 Mobility, a joint venture between the CEP partner companies Air Liquide, Daimler, Linde, OMV, Shell, and Total. The partners’ primary goal is to operate 100 stations in seven German metropolitan areas (Hamburg, Berlin, Rhine-Ruhr, Frankfurt, Nuremberg, Stuttgart and Munich) and along motorways and highways by 2019. Another 300 hydrogen fuelling stations will follow as the vehicle numbers are ramped up.

H2 Mobility thus continues the longstanding commitment of the Clean Energy Partnership, which is involved in the construction of the first 50 service stations as part of Germany’s National Innovation Program for Hydrogen and Fuel Cell Technology. The CEP partners also took an important step towards establishing an H2 infrastructure in the market by defining norms and standards. The technology for the new hydrogen facility comes from Air Liquide and allows for refuelling about 40 vehicles per day. The Ingolstadt station was funded by the Federal Ministry of Transport and Digital Infrastructure with around 700,000 euros under the National Innovation Program for Hydrogen and Fuel Cell Technology (NIP).

E-mobility with hydrogen reduces CO2 emissions
Eco-friendly electromobility using hydrogen causes no local pollutants or CO2 emissions and, thanks to short refuelling times and long ranges, offers a high level of driving convenience. For example, fuel cell vehicles can be refuelled in under five minutes with enough fuel for a reach of more than 500 kilometres. Compared to battery-powered cars, hydrogen vehicles generate their own electricity on board by reacting hydrogen with air in the fuel cell, which generates the power needed to propel the car. The car manufacturer Audi, based in Ingolstadt, is involved – along with other partners – in the CEP, and supported the opening of the H2 station on site. The expansion of the H2 infrastructure in Germany is making good progress. The network already comprises 43 stations, and another 33 filling stations are currently under construction and/or at the planning stage.

Parliamentary State Secretary Norbert Barthle:
“At the Federal Ministry of Transport we provide technology-agnostic support for the ramp-up of alternative propulsion technology. We want to shape development at the top. In this process, fuel cells are a key technology in the propulsion shift to electromobility. Fewer emissions, rapid refuelling and a long range – that is the future of electromobility. Each new hydrogen filling station takes us one step further in the development of a nationwide refuelling infrastructure. This is how we will put more clean vehicles on the road and ensure more mobility with fewer emissions.”

Thomas Strauß, Director Service Stations at Total Germany:
“At Total, we’ve been committed to hydrogen mobility for over 15 years, and hydrogen – the fuel for the eco-friendly electromobility of the future – can already be found at 15 of our filling stations. This makes us our industry’s leading protagonist in the development of H2 mobility in Germany. Especially in the metropolitan areas of Southern Germany and along the main transport routes in Bavaria and Baden-Württemberg, we already offer a very dense network of filling stations in collaboration with our partners at H2 Mobility. With the projects we already have planned, we will be making great progress towards nationwide coverage in other regions of Germany as well this year.

Pierre-Etienne Franc, Vice-President, Hydrogen Energy World Business Unit, Air Liquide:
“We need to face the challenges of energy transition now. And hydrogen is today one of our best solutions to achieve the objectives of the Paris Agreement. Hydrogen has notably the potential to efficiently decarbonize the transport sector which is one of the major source of pollution in our cities, but it requires a dedicated infrastructure to achieve this goal. Air Liquide is proud to contribute, together with the key private and public players, to the building of the biggest hydrogen infrastructure in Europe, and thus enable the deployment of FCEVs on the territory.”

Nikolas Iwan, Managing Director H2 Mobility:
“Hydrogen-powered cars offer convenient ranges and refuelling times similar to those of combustion engines – but minus the noise and local CO2 emissions. In 2017, we already built the most hydrogen refuelling stations worldwide, in Germany. We will continue this commitment in 2018 and in doing so create the conditions required for emissions-free, hydrogen-powered mobility.” 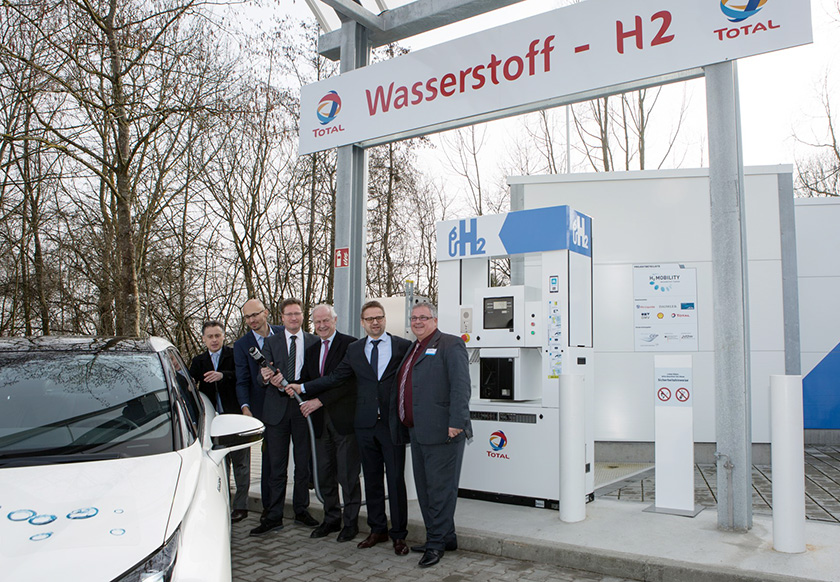