The use of hydrogen (H2) and fuel cells (FC) in China will initially be primarily focused on the mobility sector. The Chinese efforts to expand regulations and standards in this area are correspondingly strong. Similar to regulations and laws that regulate the interaction between end users, industry and the state behind the scenes, standards harmonise technologies in terms of quality, interfaces and sustainability. These regulations not only ensure the compatibility of technology, but also the implementation of the most efficient and suitable technology – which in turn leads to the desired series production of new technologies being achieved in a resource-saving and thus sustainable manner. “Whoever has the standard has the market” is how Dietmar Harting, former president of various standardisation organisations, put it conclusively.

The People’s Republic of China recognised this important characteristic of standardisation very early on. For some time now, the country has been offering special courses of study in the field of standardisation. The strategic effect this has is particularly clearly visible in the current 5G technology. Furthermore, the role of Chinese experts in other international expert bodies is growing. The People’s Republic of China is the largest sales market for German car manufacturers – and the foundation for accessing this market must be secured through the harmonised standardisation of products.

In Europe and Germany, expertise and the development of standards are the responsibility of industry. Yet regrettably, this hard work does not receive the attention it deserves in terms of its strategic-political relevance for future economic conditions.

Hydrogen fuel cell vehicles (FCEVs) belong to the so-called New Energy Vehicles (NEVs), for which there are mandatory production quotas in China. In September 2020, the Chinese government released its new funding programme for FCEVs, which will also serve as the basis for the development of a comprehensive H2/FC value chain.

To ensure that this development takes place, a multitude of new and revised standards will be introduced to safeguard hydrogen technologies. The aim is to close regulatory gaps and enable a nationwide market ramp-up. In China, hydrogen is also produced from renewable energies, and the use of green hydrogen in industry is already being addressed.

New fields of application are necessitating further regulation. China is pursuing an ambitious internationalisation strategy. The country is represented in many important international H2/FC-specific standardisation and regulatory bodies and is gaining considerable influence through the “One Belt, One Road” initiative and increased involvement in the Pacific region, including through the “Regional Comprehensive Economic Partnership” (RCEP) Asia-Pacific Free Trade Agreement.

The efforts being undertaken by German stakeholders to achieve greater international harmonisation in the field of hydrogen standardisation should therefore be intensified, particularly with regard to China, in order to continue to secure market access for German technologies there.

Regulations and standards in China

The Chinese legal system, which is based in principle on the continental European legal system from the beginning of the 20th century, is being continuously developed and is increasingly incorporating elements of the Anglo-American legal system. The size of the country and the complex structure of the legislation – but also the desire to introduce new laws swiftly – mean that many legal texts are kept relatively general and are to be regarded as guidelines.

The standards landscape for hydrogen mobility in China

Standards on hydrogen fuel cell mobility are roughly subdivided in the Chinese system into electric vehicles, hydrogen infrastructure, storage and fuel cells. Different organisations are responsible for the respective technical standardisation bodies, which are assigned to different authorities in terms of their disciplines. The Standardization Administration of China (SAC) is a link between all bodies. The SAC is authorised to exercise the administrative functions for standardisation in China and to undertake the central administration.

With the increase in renewable energy (RE) facilities and a growing demand for hydrogen in the transport sector, green hydrogen production is expected to continue to assume an increasing degree of importance. With it, further questions and aspects of certification and harmonisation will arise, such as the issuing and trading of guarantees of origin. In addition to power-to-gas plants, this also concerns regulations for hydrogen pipelines with multiple feeders, which are to be regarded for the transportation of large quantities of hydrogen over long distances.

Key challenges for small to medium-sized enterprises (SMEs) from abroad include the large number of standards, the lack of transparency regarding the relevance and implementability of requirements, and access to information or participation in standardisation committees. Overall, it can be said that the clarification of detailed questions and issues currently requires direct coordination with the technical contacts in the specific Chinese working groups. Furthermore, with regard to the requirements for fuel cells, tanks, pressurised components, maintenance procedures and interfaces for the integration in FCEVs, several aspects still seem to be insufficiently detailed or even contradictory. As the market continues to ramp up and competition increases, the need for stringent and clear standardisation will become even more important. 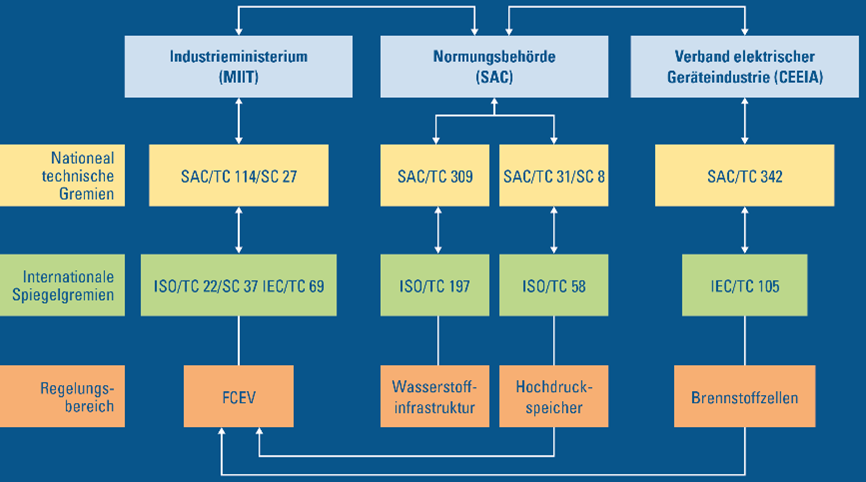 Vehicle standards:
Formally, the Chinese Ministry of Industry and Information Technology (MIIT) is responsible for standardisation within the automotive industry. The National Technical Committee of Auto Standardization (NTCAS), which is also the name of the standardisation body SAC/TC114, works under the leadership of the MIIT. Its task is to establish and further develop standards applicable to NEVs, including FCEVs, as well as for relevant parts and components.

The NTCAS was established in 1988 and has 30 technical subcommittees. As the national road vehicle standardisation organisation, NTCAS represents China in the corresponding international bodies ISO/TC22, IEC/TC69 and UNECE WP29. Its secretariat is part of the China Automotive Technology and Research Center (CATARC).

A NTCAS electric vehicle subcommittee entitled SAC/TC114/SC27 is responsible for the development of standards for electric vehicles, including FCEVs, and the corresponding roadmap. Internationally, GTR13-UNECE WP29 (ECE/TRANS/180/Add.13 + Appendix 1) provides the legal basis for type testing and certification of an FCEV in accordance with the 1998 United Nations Agreement.

This set of regulations is currently being further developed into GTR13-II. There are indications that the corresponding Chinese GB standard, which is under development, will fully reflect the agreement. Furthermore, additional requirements will be added if they cannot be included in GTR13-II. A vehicle developed and tested according to this GB standard in China would thus be compatible for the world market. However, conversely, not all the vehicles homologated according to GTR13-II will necessarily be compatible for the Chinese market.

Fuel cell standards:
For the design, testing and approval of fuel cell components, several relevant, partly even overlapping national standards already exist (e.g. GB/T 33978-2017 PEMFC Modules for Road Vehicles and GB/T 36288 Safety Requirements for the FC Stack). SAC/TC342, the Technical Committee for the National Standardisation of Fuel Cells and Flow Batteries, is responsible for the preparation of the aforementioned standards. However, there are still no uniform standards for an integrated fuel cell system with respect to a large number of aspects. A standard for the required hydrogen quality for use in an FCEV has been available as GB/T 37244 since 2018. This specifies strict limit values for some parameters in order to protect fuel cells from irreversible damage. The limits in this GB/T are essentially identical to the limits specified in ISO/14687:2019.

High pressure storage:
The National Standardization Technical Committee of Gas Cylinders (SAC/TC 31) and the corresponding Subcommittee on High Pressure Vehicle Fuel Tank SAC/TC 31/SC8 are concerned with the standardisation of high pressure storage systems and tanks, such as those used for storing hydrogen in vehicles. China does not yet have a nationally binding standard for tanks that consist of a plastic liner wrapped with carbon fibres. These so-called Type IV tanks are better suited for higher pressure levels and thus for use in the more compact passenger car applications as well as for buses and trucks with longer ranges.

According to the current regulations applicable in China, only Type III tanks can be installed in vehicles. Nevertheless, the use of Type IV tanks is also being sought by Chinese car manufacturers. For this reason, SAC/TC31/SC8 invited public comments on the T / CATSI 02 007-2020 group standard as a first step in mid-2020. This safety-relevant group standard specifies the types, parameters, technical requirements, test methods, inspection rules, installation protection, labelling, packaging, transport as well as storage of Type IV tanks for vehicles, and is of relevance for the entire service life of a vehicle. This group standard was implemented in October 2020 and can thus be used by tank manufacturers for the acceptance of Type IV tanks in China without being nationally binding. It is, however, a step towards a nationally binding GB standard as well as an important prerequisite for the marketability of fuel cell passenger cars in China and has the potential to also influence international developments.

Systematics of hydrogen standards from an infrastructure perspective in China:
The implementation of normative requirements for infrastructure in China, however, is not only based on nationally applicable GB and GB/T standards. Additional local requirements applicable to the infrastructure are imposed or specified. These include, for example, local approval and offtake processes for hydrogen filling stations. In Germany, by comparison, besides the authorisations required by occupational health and safety as well as environmental legislation, there is the harmonised offtake process for hydrogen refuelling stations developed by the Clean Energy Partnership industry initiative. In order to enable hydrogen mobility locally, individual pioneering cities and regions in China, such as the cities of Wuhan, Foshan, Shanghai, Rugao and Dalian, have already been active in different capacities for several years and have each developed and specified their own requirements for the construction of hydrogen filling stations, for which a pathway for integration into emerging standards and regulations must now be found. The Ministry of Housing and Urban-Rural Development (MOHURD) published a draft version of a national standard in June 2020 that provides basic definitions and regulations for the construction and operation of hydrogen refuelling stations.