An eagerly awaited day: STOAG and Vestische celebrate the launch of their joint new electric bus line 979. With the shared electric bus line connecting the cities, the companies are taking on a pioneering role in North Rhine-Westphalia.

Coinciding with the timetable change on 13 July 2019, STOAG and Vestische will introduce four e-buses that will shuttle between the central bus station in Bottrop and Oberhausen-Sterkrade station. The project not only sets an example because the transport companies are making a complete switch from diesel to electric drive, but also because of the close and successful cooperation across city boundaries.

The batteries of the electric buses are recharged in only ten minutes in Oberhausen via a charging station that draws electricity from the overhead tram line. Besides synergy effects, such as in maintenance and repairs, STOAG and Vestische are also focusing on gaining insights into the future potential of e-mobility.

The deployment of electric buses is a sustainable contribution to reducing local exhaust emissions, thereby harmonizing perfectly with local climate concepts. In addition to improving the quality of life in urban areas, it also provides customers with greater comfort, as the vehicles are quieter and have more smooth movements.

The ongoing “Joint STOAG and Vestische e-bus line” project is being supported by the Federal Ministry of Transport and Digital Infrastructure (BMVI – Bundesministerium für Verkehr und digitale Infrastruktur) with a total of €157,000 in funding within the scope of the local electric mobility (Elektromobilität vor Ort) funding guideline. The NOW National Organisation for Hydrogen and Fuel Cell Technology coordinates the implementation of the funding guideline. The InnovationCity Ruhr – Model City Bottrop is subsidising the electrification of the 979 line with funding totalling €193,000.

The NRW Ministry of Transport is supporting the procurement of STOAG’s electric buses, the specific workshop equipment and the conversion of the charging station with a total of €890,000.

To support the further expansion of electric mobility, Transport Minister Hendrik Wüst also presented STOAG with a funding approval notice for the procurement of a further 15 electric buses.

Hendrik Wüst, Minister of Transport of the State of North Rhine-Westphalia:
“It is a good thing that an increasing number of transport companies are making use of our funding scheme. The conversion of city bus fleets is an important element in improving the air quality in our cities. Public transport in particular can make an important contribution with its vehicles, which are on the move practically all day long. With electric buses, we are decisively driving our efforts to reduce air pollution forward.”

Oliver Hoch, Programme Manager Electric Mobility at NOW GmbH:
“Buses in local public transport travel long distances each day in or between cities in Germany. The conversion of lines or entire bus fleets to clean powertrains is an important contribution to improving air quality and achieving the defined climate targets. The Federal Ministry of Transport and Digital Infrastructure therefore supports the use of the Vestische’s electric bus on the joint intercity line between Bottrop and Oberhausen with funding of €157,000.”

Gabriele Matz, authorised signatory at Verkehrsverbund Rhein-Ruhr (VRR) and responsible for central finance and committee management:
“With this funding, the state of NRW and VRR are yet again making an important contribution towards making energy-efficient drive systems suitable for everyday use and for deployment on lines of public transportation, and establishing them in the network area on a long-term basis.”

Daniel Schranz, Lord Mayor of the City of Oberhausen:
“The common goal of Bottrop and Oberhausen is to lessen the impact on our environment. Electric mobility is a suitable means of achieving this. Personally, I still see a lot of potential here, so it’s all the more important for us as cities to lead the way.”

Bernd Tischler, Lord Mayor of the City of Bottrop:
“As the InnovationCity Ruhr – Model City Bottrop, we know all about the special importance of public transport in the context of the energy transition and with regard to climate protection. To date, we have not made as much progress in Bottrop as I personally would have liked on the field of ‘transport’. However, with this new e-bus line, a good start has now been made, which gives me great pride and satisfaction.”

Werner Overkamp, Managing Director of STOAG:
“With the electrification of joint bus line 979, STOAG is continuing the expansion of electric mobility, which began in 2015 with the introduction of two e-buses in regular service. This will enable us to make optimum use of the existing infrastructure at the Oberhausen-Sterkrade site.”

Martin Schmidt, Managing Director of Vestische:
“The procurement of the electric buses only represents the beginning of a longer process. We will also require support for making the necessary investments in infrastructure, spare parts and workshop facilities. Only with this kind of long-term and sustainable support can e-mobility really gain momentum.” 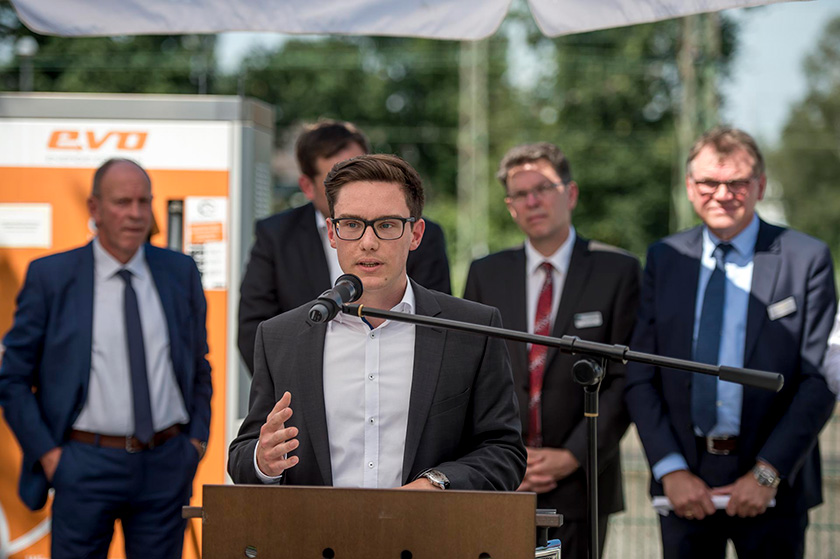