CEP partner Air Liquide opens new hydrogen filling station in Düsseldorf-Holthausen Around 700,000 euros in funding from the Federal Ministry of Transport and Digital Infrastructure (BMVI) under the National Innovation Programme for Hydrogen and Fuel Cell Technology (NIP) Another important milestone in the establishment of a nationwide infrastructure for hydrogen-powered e-mobility

The H2 station is conveniently located on a publicly accessible part of the Henkel grounds, on Oerschbachstrasse, in the immediate vicinity of the Düsseldorf-Süd motorway junction (A46/A59). It is the 16th public H2 filling station in North Rhine-Westphalia and, after the station on Höherweg in Düsseldorf, the second Air Liquide is invested in and operates in the state capital. There are now 71 hydrogen filling stations in Germany; by the end of 2019 there are to be 100.

The H2 station was built as part of the Clean Energy Partnership (CEP). The Federal Ministry of Transport and Digital Infrastructure (BMVI) is subsidising the construction and operation of the station with around €700,000 via the National Innovation Programme for Hydrogen and Fuel Cell Technology (NIP).

The refuelling facility in Holthausen is state of the art. Its operation is intuitive and the refuelling process is no different from that of conventional fuels. Drivers of fuel cell vehicles can refuel in just three to five minutes. After refuelling, vehicles have a range of up to 800 km.

Electromobility with hydrogen causes neither pollutants nor local CO2 emissions. Unlike battery-powered cars, hydrogen vehicles generate their own electricity on board by reacting hydrogen with air in the fuelcell, thereby creating power for driving the car.

Prof. Dr. Andreas Pinkwart, North Rhine-Westphalia’s Minister for Economic Affairs, Digitization, Innovation and Energy:
“The future belongs to hydrogen: in an energy system that is increasingly dominated by renewables, it can serve as an excellent long-term storage medium and universal fuel, and can become a key element for the energy and traffic transition. Hydrogen-powered fuel cell vehicles are an important building block for our goal of climate-friendly mobility. For hydrogen technology to be able to assert itself on the market, a comprehensive network of filling stations is required. I therefore welcome the opening of the hydrogen station here in Düsseldorf.”

Johannes Wieczorek, Head of Climate Protection division, Federal Ministry of Transport (BMVI):
“The ramp-up of alternative propulsion systems and fuels must be promoted in a way that is open to all types of technology. For the Federal Ministry of Transport, the fuel cell is a key technology in electromobility. Fewer emissions, fast refuelling, and long ranges – that is the future of electromobility. Every new hydrogen filling station takes us one step further in the development of a nationwide refuelling infrastructure. This will enable us to put more clean vehicles on the road and ensure greater mobility with fewer emissions.”

Gilles Le Van, Managing Director of Air Liquide Deutschland GmbH:
“Because of its versatility, hydrogen plays a key role in the transition to a clean, low-carbon energy system. It’s a key driver for the achievement of climate protection targets, as it doesn’t cause any climate-damaging emissions at its point of use. Hydrogen can be stored and transported in liquid or gaseous form with high energy density and is therefore an intelligent, sustainable solution for both industry and mobility.”

Dr. Daniel Kleine, Henkel President Germany and Site Manager Düsseldorf:
“At Henkel we have been relied on electromobility for many years. Our first hydrogen vehicle has also been in operation since March. We expect further models and commercial vehicles to come onto the market in future. So the construction of the new hydrogen filling station at our largest site worldwide – here in Düsseldorf – is an investment in the future.”

Wolfgang Scheffler, Mayor of the state capital Düsseldorf:
“Today I’m pleased to be able to open the second hydrogen filling station operated by Air Liquide in Düsseldorf, after the one on Höherweg. I’m especially pleased about the climate and environmental protection aspects of this. The worldwide ‘Fridays for Future’ movement and many related campaigns and debates in Germany have shown us that this issue cannot be put off. It has also become clear that industry is often ahead of the policymakers and is waiting for clear guidelines. I expressly welcome the commitment of Air Liquide and our historic Düsseldorf company Henkel to continue expanding their fleet towards e-mobility, for example, but also to use hydrogen-powered vehicles. The state capital of Düsseldorf’s ambitious goal of becoming climate-neutral by 2050 means significantly minimising carbon dioxide emissions in many areas. This hydrogen filling station makes an exemplary contribution to this and is an important building block in achieving this goal.”

Jörg Starr, Chairman of the CEP:
“We are delighted that the expansion of the H2 infrastructure is progressing by leaps and bounds. The partners in the Clean Energy Partnership have laid the foundation for the establishment of hydrogen and fuel cells on the market. We started out as true pioneers, but now our vision has become a reality, and shows how much CEP partner companies have achieved together. Our strong team will continue to act/pursue its activities with a view to achieving an integrated hydrogen economy.” 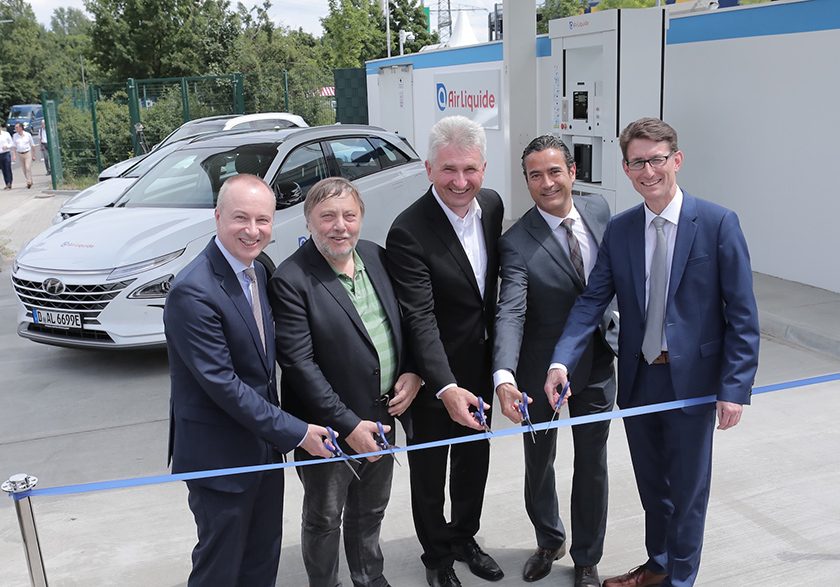